Three of the newest faculty members of the Trulaske College of Business community have made their way this fall to Cornell Hall by way of the former MU College of Human Environmental Sciences (HES).

All three share the same MU Extension mission of enhancing the lives of Missourians by providing programs that foster economic opportunity, educational access, and health and well-being, with grant support totaling close to $4 million.

“We have worked diligently to partner with MU Extension over the last several years to open additional pathways to interdisciplinary collaboration at MU, extend the presence of our college within our state and proactively engage with and support the citizens of Missouri,” said Trulaske Dean Ajay Vinzé about the addition of the new faculty members.

Learn about their individual stories below. 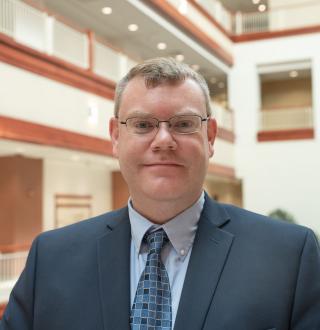 Moving from Stanley Hall to Cornell Hall has been no easy task for Andrew Zumwalt BS BA, BS ’04, MS ’06.

Zumwalt directs the MoTax program, the Missouri Taxpayer Education Initiative that is the University of Missouri’s arm of the federal Volunteer Income Tax Assistance program. As such, he made the move with a large assortment of Chromebooks, printers and routers that have helped the program prepare approximately 90,000 federal tax returns since 2006.

Given that it would cost around $200 to have an individual tax return professionally filed by a service, MoTax has saved Missouri residents close to $18 million.

“It's not even about the taxes. It’s about developing community volunteers and helping students realize how to talk about money,” Zumwalt said of the 30 to 90 students, both graduate students and undergrads, who assist with the program each year.

On top of all of the equipment needed to manage the MoTax program, one will also find a large assortment of communications equipment used to hold high-quality Zoom meetings — a necessity during COVID-19 times, as Zumwalt and company find themselves in unprecedented high demand.

"There's a message there around uncertainty,” said Zumwalt, who became a CERTIFIED FINANCIAL PLANNER™ in 2015. “When people start feeling uncertain about their futures, their money and their health, they really start asking a lot of questions. That's when we get the largest number of media requests.”

In addition to seeing a major uptick of Zoom interviews for media outlets, Zumwalt and his colleagues have also been holding online forums and creating digital presentations at a rapid rate.

"It's not too much to say that we worked harder the past year during the pandemic than we worked in prior years, because there was so much new information that people needed in order to make informed decisions,” he explained.

Added longtime colleague Graham McCaulley: “We worked in different ways, such as sitting on Zoom meetings and having a Slack channel constantly open. We were doing none of that before and now we're doing it 10 hours a day at the height of COVID. It was a response to what the community needed. That's why I say we worked harder than ever before — because we had to.”

A St. Louis native, Zumwalt started thinking about personal finance after being introduced to a book by his sophomore English teacher: A Random Walk Down Wall Street by Burton G. Malkiel.

While majoring in both economics at Trulaske and consumer and family economics at HES, Zumwalt met his wife, Valerie BJ, BS ’04, while they were working in residence life at the now-demolished Donnelly Hall. They now have three children ranging from 6 years old to newly born.

Zumwalt began working full-time for Extension as the director of the MoTax program in 2006 when McCaulley was a graduate student using a cubicle next to Zumwalt’s office in Stanley Hall.

He remembers all of the times that McCaulley would prank call him.

“I'd pick it up, and then there'd be nobody there,” Zumwalt said. “And I would hear him laughing from the front, because that's where his space was."

“He got wise to the fact that we were using our office phone, so another grad student and I would covertly do it with a cell phone and we'd space it out so he wouldn't catch on to us,” added McCaulley.

Eventually the two would form a partnership that has spanned for 15 years — and counting.

He said that one of his missions as a new member of the Trulaske family is to make the college a more tangible entity for families across the state through community interactions on multiple platforms.

“Engagement is really hot on campus, and it's about bringing that engagement to the communities,” he said, “and highlighting Trulaske’s role." 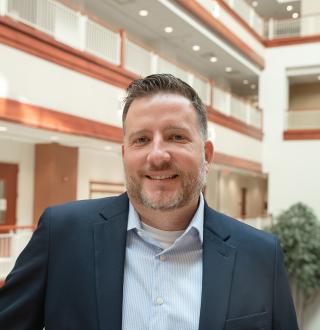 During his academic journey at the University of Missouri, Graham McCaulley BS HES ’06, MA ’08, PhD ’14, picked up a business minor from the Trulaske College of Business.

"Now I've made my way back after 20 years,” McCaulley said with a chuckle.

A native of Columbia and the son of two Mizzou alumni, McCaulley credits his current role largely to the experience he had while working at a payday lender for a year as an undergraduate. He began to realize the importance of promoting financial education and literacy to the general public.

"It was clear to me that the model was not ‘Pay your loan off and see you later.’ The model is, you're hooked and you're staying hooked,” McCaulley said. “That really spurred an activism in me.”

McCaulley would go on to take several service-learning courses. One centered on working at a volunteer income tax site for low-income Columbians. Another involved stopping by and working with students at a disadvantaged school. These social work-centered courses helped form a mantra when determining his career path: “I don't just want to make money. I want to help people.”

Out of all of the projects he is currently working on, there are few that provide more encouragement to him than a community health worker support initiative through a partnership with the Missouri Foundation for Health.

The initiative has allowed community health workers (CHWs) to connect with each other across the state, many of whom entered the growing profession as a response to the beginning of the Affordable Care Act (ACA) in 2010. McCaulley and colleagues met many of these future CHWs, who had first begun to help facilitate the ACA on behalf of community members and non-profit organizations.

"That's a really exciting model that is just now emerging,” said McCaulley, who has been working alongside fellow Extension faculty member Marco Pantoja on the initiative. “It’s gaining steam across the U.S. Missouri has the potential to really be a leader for the community health worker model.

“These are the people who are literally on the frontlines with COVID. They are statewide.  We've gotten to know them, in the middle of an unprecedented pandemic, and what we've seen is that they're still new and we really think that we can help build out their organizational capacity.”

The program, now in its second year, began with the intent of providing continuing education hours to CHWs, but has since picked up a larger unforeseen development component to it.

In a similar vein, McCaulley is teaching Advanced Professional Development Principles (BA 3500) at Trulaske this fall. The course takes students and connects them with actual businesses and nonprofit organizations. Since the beginning of the semester, McCaulley has been making calls across the state to get partners to participate in the class.

"To me this is really full circle because experiential learning was so pivotal in shaping my trajectory, and now I'm facilitating other people having experiential learning,” said McCaulley, who lives in Fulton, Missouri, with his wife, Whitney, M Ed ’11, and their three daughters.

It is through partnerships such as those involving community members and Trulaske students that McCaulley hopes to aid in the effort of telling the Trulaske story.

"Trulaske has amazing programs on the business side, but then there's also a side where we're doing work in the health realm, too. We're impacting communities in ways beyond just the obvious economic opportunity,” McCaulley said. "We have excellent faculty who are researchers and teachers with industry connections. I want to say to people, ‘Don't write off the business school thinking, that's all it is.’ I want to tell the public value story.” 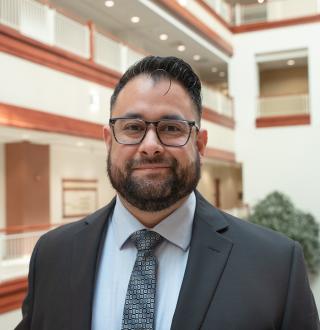 Marco Pantoja BS HES ’15, MS ’20, grew up in California, Missouri, as the son of two former U.S. Marines who met while stationed in Honolulu. Joining the military at 17, he trained in the field of metrology, the science of weights and measures, while upholding the family tradition of being in the Marines.

After leaving the military in 2007, he joined the private sector working in Washington State through a connection with a former Marine colleague. Pantoja realized, though, that the repetitive tasks and lack of social interaction made the job a bad fit for his personality.

“My favorite part of my job was calling customers and talking about the problems in their equipment, and trying to help get more details so that I could fix it,” Pantoja said.

Following his nine years as a U.S. Marine and three years in the Pacific Northwest, Marco Pantoja knew he wanted to return to his home state to finish his undergraduate degree.

It was not until a conversation in 2013 with Alex Embree, the former senior student services coordinator at HES, that he realized his vocational calling, given his combined interests in both personal finance and working directly with people.

"She told me all about personal financial planning and I said, ‘Yes, this is what I've been looking for,’” said Pantoja.

He first began growing an interest in finance in general during the Great Recession in 2008. Pantoja said that he could not believe the narrative that the cause of the financial crisis centered on people buying houses that were too expensive for their budgets.

“So I dug in and tried to learn about the things that banks and financial institutions were using to basically shuffle mortgages around and the pursuit of financial products such as mortgage-backed securities,” Pantoja said.

After learning more about the inner workings of the financial world, he felt a desire to help defend the less informed, but he would not discover that pathway until he made his way to Mizzou some five years later.

After earning his bachelor’s degree in 2015, Pantoja became the interim director of the Office of Financial Success, while pursuing his master’s degree. He held that position for three years before becoming a financial educator/counselor and later a member of the HES Extension faculty in the spring of 2019.

Before COVID hit, Pantoja gave seminars to groups of people around the state who were interested in improving their financial literacy.

“Everything that I have done has basically been towards that end of talking to people about money, trying to prevent financial services from preying on them,” he said, “and helping people know what their options are so that they aren't as easy targets.”

Pantoja — who this fall is teaching a section of the Principles of Management (MANGMT 3000W) course, along with Shannon Breske and Christie McCullough, and the online version of the BA 3500 course — is looking forward to bringing a “unique perspective” to the Trulaske community.

“I hope that we can help spread the word about Trulaske and help each other as partners throughout the state, reaching more people, having the resources to develop programming that is relevant and effective,” he said. “And I think we're going to get there."