Daryl Smith, BS BA ’83, was awarded a 2020 William T. Kemper Fellowship for Teaching Excellence by setting high expectations and then providing students with the support necessary to achieve and perhaps surpass those levels.

Daryl Smith was 45 minutes into teaching his 2 p.m. course on compensation theory and practice when the classroom door opened and University of Missouri System President and MU Chancellor Mun Choi walked in with Trulaske College of Business Dean Ajay Vinzé and administrators in tow.

Some professors might have been concerned. Not Smith. “This can only be something good,” he recalls thinking.

He was right: Choi apologized to the students in the room and on Zoom for interrupting — and then awarded Smith with a William T. Kemper Fellowship for Teaching Excellence. One of five outstanding MU teachers to receive the fellowship this year, Smith accepted the award, which includes a $10,000 check, with a knowing smile under his face shield.

“That was quite an amazing moment and certainly one I’ll never forget,” he says a few days later. “I don’t mind saying that it feels good. But I also know that I love what I do, so I’m willing to put a lot of time and effort into it.”

It’s a work ethic that was instilled in Smith years ago and one that the associate teaching professor at Mizzou tries to pass on to the students he teaches and mentors today. 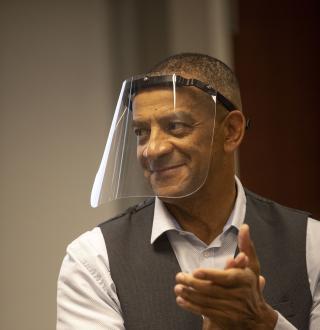 Muriel Battle stopped him. She asked about his classes and schoolwork. Then she said five words that changed the trajectory of Smith’s life: “When you get to college … ”

“I’m like, ‘What? Huh? College?’” Smith recalls thinking. “When someone says, ‘When you get to college, when you do this, when you do that,’ they are setting an expectation. They’re also saying you have potential. Words like that are so powerful.” Now Smith had a goal.

Another confidence boost came from football coach John Henage. Henage’s first year at Rock Bridge High School was Smith’s senior year. But Smith hadn’t played on the team the previous year. His father was sick, and he needed to help out at home. So when the depth chart was posted, he didn’t have high hopes. Yet his name was listed as a starter on both offense and defense. “That says again that someone believes in me,” Smith says.

With a dream and the confidence to go after it, Smith enrolled in the Trulaske College of Business at the University of Missouri. It was his turn to inspire people to reach greater heights of performance and success.

For 25 years, Smith did just that. After earning a bachelor’s from MU and a master’s in business administration from Washington University in St. Louis, Smith established a reputation for creating award-winning workplaces by focusing on employee engagement, operational efficiency and business strategy.

The entire time Smith was working in industry, he was also speaking to classrooms and serving on boards and committees at Mizzou, including the search committee to replace Bruce Walker, who made the transition from the college’s dean to faculty member in 2010. “I recall asking some really tough questions around the topic of diversity and inclusion during the interview process,” Smith says.

So did Joan Gabel, who was hired and served as the Trulaske College of Business dean at MU from September 2010 to August 2015. After a year on the job, Gabel called Smith and asked him to come work for Mizzou: “Do you remember those tough questions about diversity and inclusion that you were asking me during my interview? I want you to come help us with that.”

He didn’t have to think very long. “I was ready to complete that circle and return to Columbia.”

Back at Mizzou, Smith served as the director of the Vasey Academy, a scholarship program started in 1997 to provide support and mentorship to students from underrepresented groups. He challenged the scholars to “think strategically like CEOs,” and he modeled relationship building by introducing them to executives throughout the country.

During his tenure as director, from 2012 to 2018, Smith also helped institute a summer residential “camp” for high school juniors and seniors where they attended mini business school classes, participated in pitch competitions and experienced college life at Mizzou. He told them that when they got to college, they could join the Vasey Academy.

“These experiences are the first of any experiences these students have had with a college, let alone a college professor,” says Leigh Neier, associate teaching professor in the College of English and a 2014 Kemper Fellow. “He became the college professor he knew an auditorium of first-generation college students needed to see, hear and connect with. He promised them that if he can rise to the ranks of executive leadership at ESPN and obtain a degree from institutions like Mizzou and Washington University in St. Louis, then they can, too.”

Through his coaching and mentoring, Vasey scholars achieved a graduation rate of about 90%. Scholars were selected for Mizzou ’39, inducted in secret honor societies, applied to and received various corporate grants, and launched new and innovative development programs within the academy.

“He not only inspired me to reach for my dreams but also taught me how,” says former Vasey scholar Arozo Shahabzada, BS BA ’15.

In the classroom, Smith is rarely behind the lectern. He’s usually moving about the room, using his arms and eyebrows to express himself, and asking students tough questions. “I tell students all the time: ‘I hate my own voice. I want to hear yours,’” he says.

Former student Christy Scheibeler, BS BA ’19, recalls the first time she walked into one of Smith’s classes. He handed everyone an index card and asked them to write down their preferred name, hometown, major, expected graduation date and something unique about themselves. By the second week of class, he knew everyone’s name. By week three, he knew something personal about each student — and there was a good chance he’d had a one-on-one conversation with them, too. “I was honestly blown away by the thought that a professor would care to know about us individually,” Scheibeler says. “Not only did he teach incredible academics; he taught us how to treat the world and each other better. Since taking his first course, I have always lived with a motto he shared: ‘Wake up every day with the ability and goal to positively influence others.’”

When Smith isn’t in the classroom, he’s pulling a page out of Battle’s playbook, walking through Cornell Hall and stopping students to check in on academics and personal matters and to coach them on careers and how to succeed at Mizzou.

“My office door is literally two feet from Daryl’s, so I often hear students congregating outside his open door (which happens numerous times per day),” says Donald Meyer, assistant teaching professor in the College of Business and a 2019 Kemper Fellow. “Many of the students are first-generation, minority, college students that drop by for an informal chat. I have no doubt that Daryl could earn a far greater salary in the private sector, yet he uses his extensive experience, skills and knowledge to better prepare and mentor MU students.”

Smith was also the visionary behind the creation of the SEC Business School Diversity and Inclusion Conference in 2015, which allows business school diversity officers to share best practices and promote new initiatives in diversity and business. When Mizzou’s diversity initiatives were being challenged across the country, he quickly stepped up as a member of the faculty race relations committee.

“I think the world is a much better place when we can all identify the common ground we share with others,” Smith says. “Are we different? Yes. Do those differences matter? Yes, they do. But if we look for it, there’s so much common ground that also exists.”

“To Professor Smith, we are the future generation of the world and it’s his personal responsibility to give us all the resources and experiences we need to be successful,” Shahabzada says.

Sometimes, all they need is someone who believes in them.

“I want any young person I come in contact with to know that whatever they aspire to do is possible,” Smith says. “Maybe even a step or two above that is possible. It helps when you have other people who believe in you. I try to do that for others.”