Harry M. Cornell, Jr., BS BA ’50, the namesake of the building that houses the Trulaske College of Business, was honored during a dedication of a tree outside of Cornell Hall on the Carnahan Quadrangle on October 20. 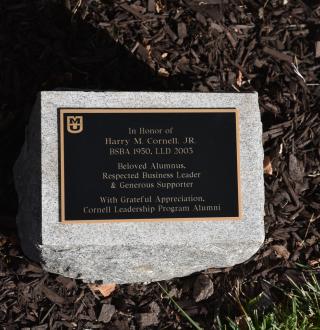 Cornell earned a bachelor's degree in business administration from the University of Missouri in 1950. In conjunction with Leggett & Platt, Cornell made a substantial gift to the college during its Excellence Through Change campaign. In 2006, he made an additional gift to the college, part of which continues to fund enhancements to Cornell Hall. The gift also established the Cornell Leadership Program, which provides scholarships and a specially designed program that takes business school students beyond the traditional classroom experience.