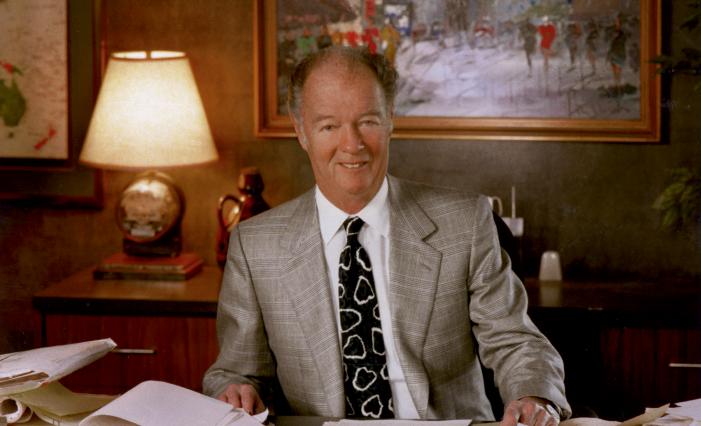 Bob Trulaske was born April 29, 1918 in St. Louis, Mo. Mr. Trulaske graduated in 1936 from Wellston High School and was one of only two graduates to attend college. He graduated from the University of Missouri's business school in 1940 with a B.S. degree. During his time at the University, Mr. Trulaske was an R.O.T.C. officer, receiving his saber from then-U.S. Senator Harry S. Truman.

Mr. Trulaske was employed by Procter & Gamble until the start of World War II. During the war, he was a combat pilot in the European theater, flying C-47s with the 88th Troop Carrier Squadron of the 438th Troop Carrier Group of the 9th Air Force. As such, Mr. Trulaske was one of the first in the battle on D-Day; he participated in the Battle of Holland and others until the war ended.

After returning from Europe in August 1945, Mr. Trulaske married Geraldine Mae Mellor of Jacksonville, Ill., on August 28. After his discharge in September, Mr. Trulaske founded True Manufacturing Company with his father, Francis Robert, Jr., and his brother, Arthur William. Today, the firm is recognized as a leading manufacturer in the food-service and soft-drink industries worldwide. Mr. Trulaske was very committed to the well-being of the company's employees. With that in mind, he instituted extensive profit-sharing and bonus plans for his employees.

Because Mr. Trulaske viewed his education from the MU as the foundation for his success, he chose to provide financial support to his alma mater beginning in 1997. The late Mrs. Trulaske and he created an endowment to fund scholarships for students in the College of Business and a new scholarship coordinator position. This endowment supports more than 35 students in the undergraduate business program and the MBA program.

In 2002, the University of Missouri honored Mr. Trulaske by awarding to him an honorary Doctorate of Humane Letters for outstanding achievements in his business career. He passed away on September 25, 2004, at the age of 86.

In recognition of the Trulaske's ongoing support and partnership, the college was named in honor of Mr. Trulaske in 2007.